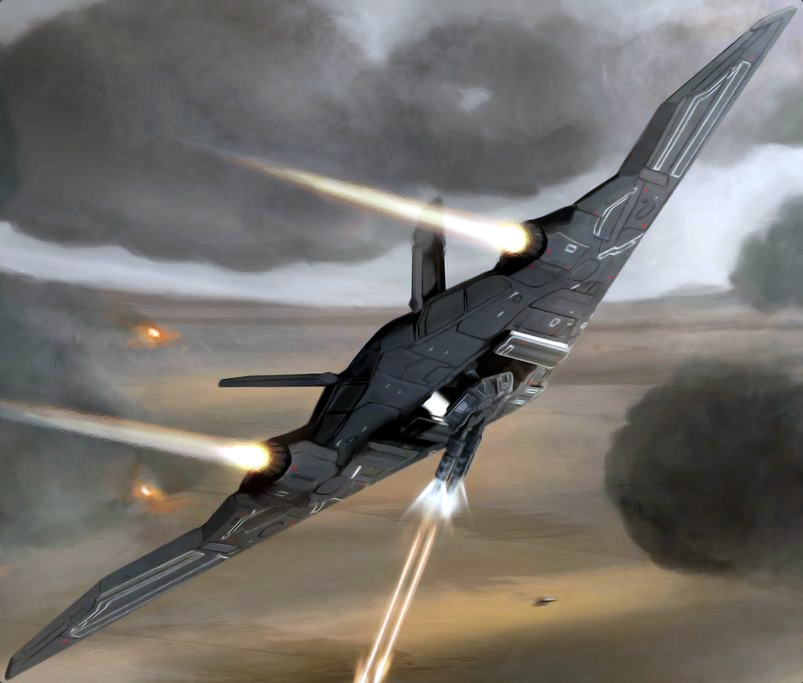 The AC-270 Spectre Gunship was designed on an earlier stealth bomber design that had a large central bomb bay and dual engines with a lifting body style frame. As bombs fell out of favor to targeted kinetic strikes or missiles the designers looked at giving it new purpose carrying this new generation of technologies. Hence the Spectre was born. The bomb bay was converted to hold a retractable railgun turret that can rival the railguns on frigates. Yet the Spectre can enter and leave an atmosphere and in space or in air be very stealthy and hard to find. This lets it loiter above a conflict and unleash target hell on targets below.

The Spectre is very simple when it comes to weapons with only a single Heavy Turret which carries a retractable Dual Slingshot 120 Railgun Turret.

The AC-270 Spectre Gunship was based on an earlier stealth bomber design that was being phased out. The change was ‘simple’ with the bombs being replaced by a retractable railgun turret, however the result was a vessel which could hover above a conflict raining down fire on targets with pinpoint accuracy while being nearly impossible to detect from below. Even with a focus on space the design can do that as well, though it’s not a fighter and should avoid engaging fighters directly.

A notable engagement the Spectre played a key part in was the defense of outpost Alpha 6. An attacking force engaged the outpost while it’s frigates were called away, leaving it only fighters for protection. However, these ‘fighters’ included a full wing of Spectres and twice as many F-43E Raptor 2 Aerospace Fighters. The outposts commander sent out these stealthed vessels with orders to harass the enemy and the flight leader decided to use all her tools to their best advantage. She had the Spectres and Raptor 2s imitate a Ares Class Frigate. They succeeded so well the enemy decided they had a frigate stealthed in their rear and in the end broke off the fight with the outpost.

The Spectre has actually done it’s job so well it has yet to really see any attempts to modify it other then general electronics updates.