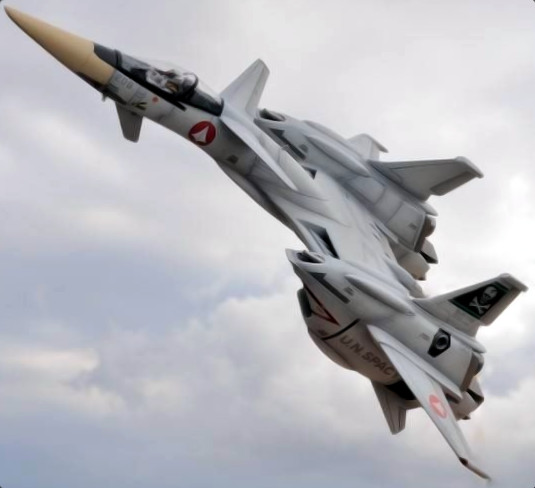 The AF-4 is a twin engine swept wing design with the engine nacelles offset on each wing. It has very strong engines and some unique design features.

The Storm has a wide range of weapons starting with a pair of Cannon Mounts using Punisher 30 Railguns. These are backed up by 12 Recessed Missiles using custom Drake ESRAMs, which are half the size of a Sparrow MRAM and correspondingly have heavier warheads and longer range. It then has 6 underwing Heavy Weapon Pylons that can hold: Avenger ASMs, 3-Pack Sparrow MRAMs, 5-Pack Falcon SRAMs, 15x Hydra Rocket Pods, or GAU-40 Railgun Pods.

The AF-4 Storm Aerospace Fighter is part of the ‘new’ Advanced Fighter series the US developed. While it was the first of the AF series proposed, it ended up having last minute issues before production that made it come out after the AF-5 Corsair 2 Aerospace Fighter. However, the AF-4 proved way stronger during it’s time forwarded to the UNSC for testing. The Advanced Equipment Module Attachment Points (AEMAP) system of the AF-5 was simply unneeded on the AF-4 and in fact the AF-4 would inspire the AEM Type RS2 unit.

The AF-4 doesn’t have any variants, but many of it’s features and it’s weapons loadout would directly influence the F-64 Super Ferret Space Fighter.