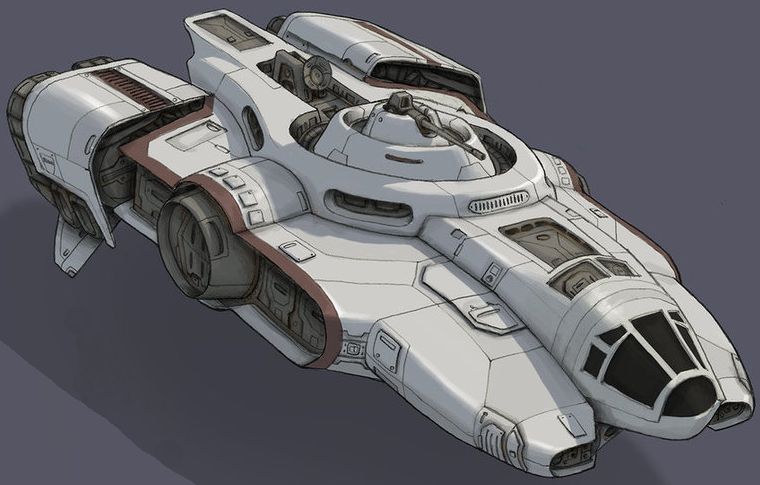 The General Aerospace PC-32 Corvette was a design they created to function as patrol corvette to guard systems or important locations. It’s heavily based on their cargo shuttle series, but smaller and sleeker. Some of the features it kept include the small bunk and ship utilities for the crew. The crew itself is usually a single pilot/gunner or a p/g with a gunner/engineer to assist.

The last ‘odd’ feature is it’s multiple access points. Usually it will dock up by using a docking port on either side of the hull, however it has a pair of airlocks just behind the cockpit on the top and bottom of the hull. This seems to be an emergency exit as well as being convenient since the crews supplies are stored there.

The PC-32 has a simple set of weapons consisting of a pair of Heavy Turret Mounts which use the Defender CIWS Railgun Turrets by default. They are good for use against fighters or other corvettes with a high rate of fire, which also have a very effective point defense mode. However, the mounts themselves can handle heavier guns.

The PC-32 Corvette is known to be a fairly good ‘light’ patrol corvette with good endurance, including accommodations for the crew. This means they can be sent out and stay out for a week or more if needed.

So far no true ‘variants’ have developed, but many groups have tried other weapons in the turrets including heavier 100-120mm railguns and dual or quad missile launchers.

At least one group went further and remounted a Defender Railgun in a fixed mount under the cockpit. This loses the turret capability, but let it mount a pair of heavier weapons and a Defender Railgun for the pilot to use. Though this modified PC-32 mounted the normal Defender railgun turret in the bottom mount, had the Defender Railgun from the top mounted under the cockpit, and then had a Eight-Shot Standard Missile Launcher. This gave it point defense, direct fire weapons, and a missile load. General Aerospace has heard of this modified version and are considering it as a possible limited production variant.