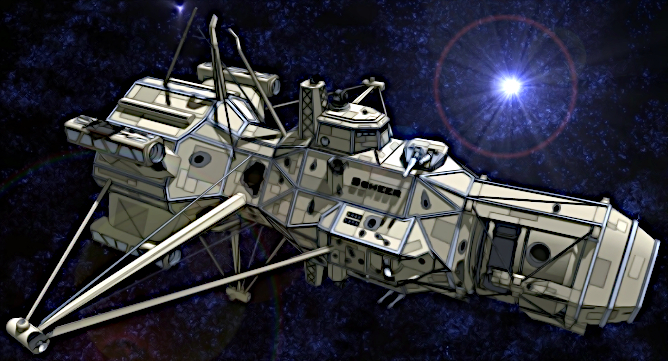 The Hunter is a tiny simple hulled design that is a rough cylander. It’s so small in fact that it’s entire crew is 7 people including the vessels captain. It only masses a bit over 4 times that of the Rocket Class Corvette.

The Hunter has a pair of Turret Mounts which have Dual Silver Bullet Railgun Turrets. Backing these up are 4 Missile Launchers with Aster Heavy Missile Tubes. These are single shot missile tubes that can fire and then requires external rearming.

The Hunter Light Frigate is a 1st generation vessel and one of the smallest designs classed as a Frigate, hence the ‘light’ part to it’s designation. They were created as a stopgap during a period of production issues for the more conventional Mako and Douglas Frigates. Facilities that couldn’t build those frigates, but could handle something larger than the typical corvette or shuttle were converted to make these. They were intended to only perform patrol duties and that is what they are still found doing. Their supplies are much to limited to operate to far away from a base or outpost, but have facilities to make long patrols not be an issue for the crew.

Their biggest issue is that a heavy fighter or corvette could be armed with a fairly similar set of weapons. The FA1181 Vengeance Fighter has at least as much firepower as the Hunter does if not more. The hunter is also much better suited to engaging frigates than fighters as it lacks powerful point defense. This has lead for calls for a new corvette to replace the Hunters and sell the Hunters off to merchants or mercenaries.

While the production of the Hunter was limited, some groups running them have made suggestions for them. Most notably cutting back on some facilities to mount a pair of Radium Laser Ball Turrets, one on each side of the hull. While this is still not great point defense when it is combined with the existing Railguns it becomes ‘ok’.

Other groups have traded in the Silver Bullet Railgun Turrets for Triple Retaliator PD Railgun Turrets taken from Rocket Class Corvettes. Some of these have gone on to use some of the ammo storage space saved to add another pair of turrets, one on each side that then use the same PD turrets. This gives it 3 triple mount PD turrets which lets it swat enemy fighters like flies. This does make it rely entirely on it’s Missiles for taking on heavier vessels though.