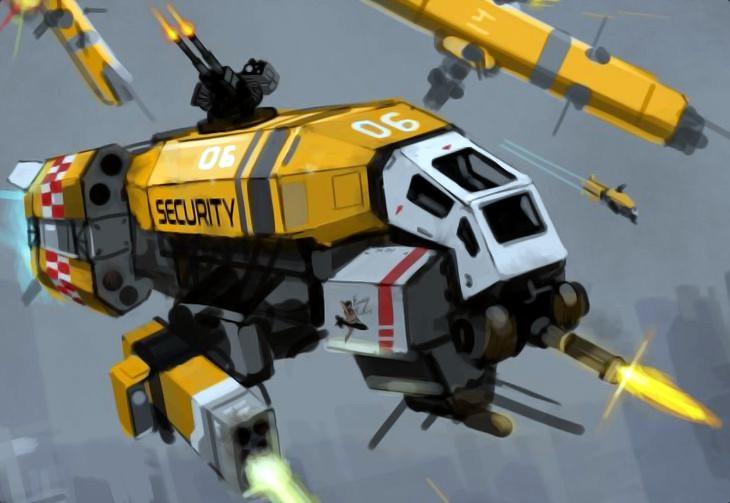 The Lockheed Martin SC-02 Security Corvette was designed to be a short range space only design to give stations and other fixed bases ‘teeth’. It’s a fairly small design with a helicopter style cockpit and a very small ‘crew space’ behind it, which includes the single vertical airlock. Behind this is all weapons and engines, which give it a solids kick and average speed. Another item of note is a low number of thrusters compared to many other designs, which makes it less agile than it otherwise could be.

The SC-02 has a pair of Turret Mounts, one of which comes with a Dual CIWS Railgun Turret and the other with a Multi-Barrel CIWS Railgun Turret. Then it has multiple missile systems starting with a pair of Standard Missile Packs which by default have 4-Tube Missile Launchers. Next is a pair of Light Missile Packs which use 6-Pack Missile Launchers, with a single set of reloads in the tubes. Lastly it has a Heavy Pylon which is typically armed with a Heavy Missile or Torpedo when expecting hard targets. Though it can also carry another Standard Missile instead for more typical combat scenarios.

The Lockheed Martin SC-02 Security Corvette was an early space only corvette design meant to protect fixed installations. The mix of weapons meant it could deal with a wide variety of enemy vessels depending on what was needed. While no ones favorite it’s proved itself in action.

It’s used by a number of groups and even some governments in small numbers. Though it’s almost never used at any sort of range, so only those wanting to protect a fixed station or outpost tend to use them.

So far no official variants have been created, however the SC-02 has been around long enough some unofficial versions exist.

The ‘Gunfighter’ variant has dropped it’s light missiles for another pair of railgun turrets. Usually the same type as the upper dual turret. This version is known for being very good against fighters and other corvettes.

The ‘Longarm’ variant replaces the Standard Missile Launchers for a pair of extra armored fuel tanks. The idea for this is that it has increased range and so can travel further and fight for longer with more maneuvering. Many of these add extra thrusters to somewhat make them more agile.