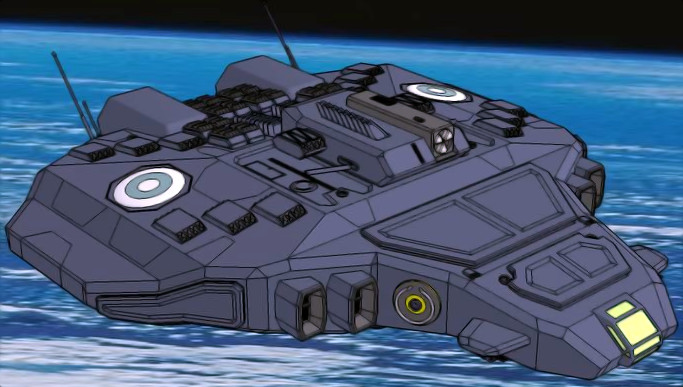 The Neridian IHL-977 Corvette Gunship is a EU design for a missile focused heavy corvette, though they were initially built as a joint project of German and Italian design groups. When the EU moved to form it’s own navy they absorbed the project. They wanted a massive load of missiles and so decided internal stores would limit the maximum volley they could achieve with the space they had. The result is much like a missile destroyer in a more compact form.

The Neridian is a massive size for a corvette and requires a minimum crew of 3. It simply doesn’t have enough room in the crew compartment for more than 3 crew, though it could really use a crew of 5 or even 7. It’s crew consists of a pilot and gun pod gunner, a sensor operator and engineer, and a missile commander.

The Neridian has a pair of Cannon Pylons equipped with Portiere CIWS Railgun Pods. The rest of it’s weapons are missiles: A Heavy Missile Box with Harpoon 4-Shot Anti-ship Missile Launcher for use against larger vessels. Then 12 ‘Flat Pack’ Missile Boxes with 4-Pack ESSM Mk7 Missile Launchers which are designed more for anti-fighter use though in large numbers can certain do damage to larger vessels. Finally it has 16 Light VLS using 12 Cell RAM G19 Missile Launchers which are short range close combat missiles. All these missiles can only be reloaded with the correct equipment, so once used the corvette must return to where it is based. That said it has 48 EESMs and 192 RAMs to use before empty.

The Neridian Corvette is a workhorse of the EU admiralty as resources went into these when funds for larger vessels became limited. So hundreds of Neridians were ordered to fill some of the gap in their forces. So far their use has had mixed results, in particular when up against larger vessels.

The Neridian is to new for any variants to have been developed. However, some ideas have been slowly considered as the Neridian gets used. In particular the Neridian has endurance it simply can’t use as it has no facilities for the crew for any long missions. A lack that has caused issues in using the Neridian the way the Admiralty would like.