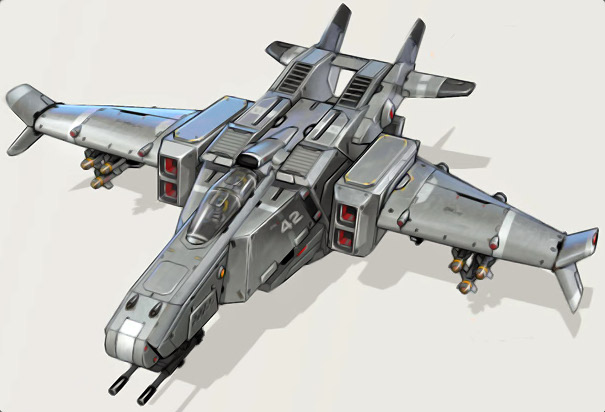 The Omul’s primary weapon is a nose Turret Mount equipped with a Dual Portiere Comapct Railgun Turret. It has an underbelly Heavy Missile Pylon for a Harpoon Anti-ship Missile, though this is only used in situations where it’s expected they will need to strike large vessels. Finally it has 4 Missile Pylons on the wings that can use either Tube ESSM Mk7 Missiles or 3-Pack RAM G19 Missiles.

The Omul Strike Fighter is a French made design originally sold to the Romanian government, which is where it’s name comes from. When the EU looked for a carrier based fighter the new Omul Type TA was offered and accepted. The nose turret has proved highly effective in close-in ‘dogfights’ letting it strike at targets most fighters couldn’t due to the angle. However, it should be noted that it’s missile load is a bit lighter than other EU designs such as the Fulgurite or even the TRSF.

The Omul was originally a CAS design meant for atmospheric use. The one seen here is the Omul Type TA. The original had purely in atmosphere engines and was not design with foldable wings for carrier use. It also used conventional aircraft cannons in the nose turret.

While not a ‘variant’ a few test versions that mount a Portiere CIWS Railgun Turret exist.