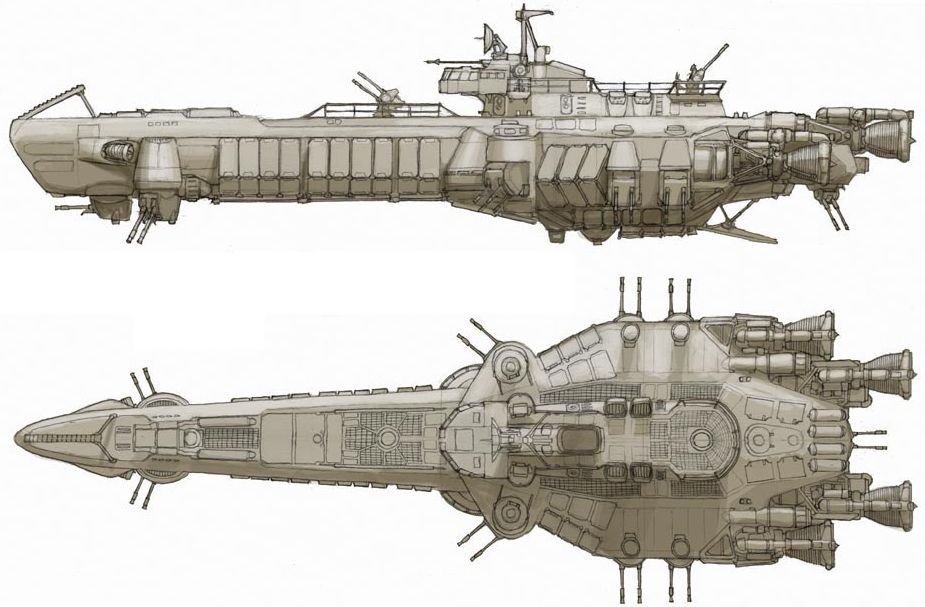 The Sky Hunter Light Frigate is almost an oversized shuttle with a ton of guns strapped to it. It lacks compartmentalization like a true military craft and has a large cargo space with a working lift to easily move cargo on and off. It also has a ‘deck’ one can walk across on the upper hull, and the two turrets on the deck can even be used in manual mode if needed. It’s only real lack for it’s purpose is endurance, which is very low. It wasn’t intended for long system travel and it shows. It also wasn’t really intended to land on a planet with an atmosphere, but it can in a pinch.

The Sky Hunter Light Frigate is the epitome of pirate vessels. Fast and light so it can run down merchant vessels. It’s also better armed than most merchant vessels. It may require a few working together like pack hunters to take down it’s target, but a large merchant vessel can easily provide for a few small vessels like this. Because of that almost all pirate groups have a large number of these little vessels.

The only real ‘variant’ is a cargo shuttle without the guns. This is actually the original vessel the Sky Hunter was created from called a ‘Pixie’. Well technically it’s a PXE Cargo Hauler, but one can imagine how it got it’s nickname. It was designed to ship cargoes between nearby planets or to do prospecting. They are still seen on occasion and rumor is that the company that made them sold the design to some early intrepid pirates.

Pirates often change up the weapon loadout of their Sky Hunters. With the most common being an upgrade to all railguns. However this requires upgrading the power systems as well, with the railguns needing much more power to run. A few brave and intrepid souls have also managed to create pylons on the underside of the hull, these pylons let them carry 2-4 Torpedoes. A few even crazier Pirate crews have made it look like they mount torpedoes, as no merchant in their right mind wants to engage a ‘torpedo boat’. However, if called on it these will come up a little short.