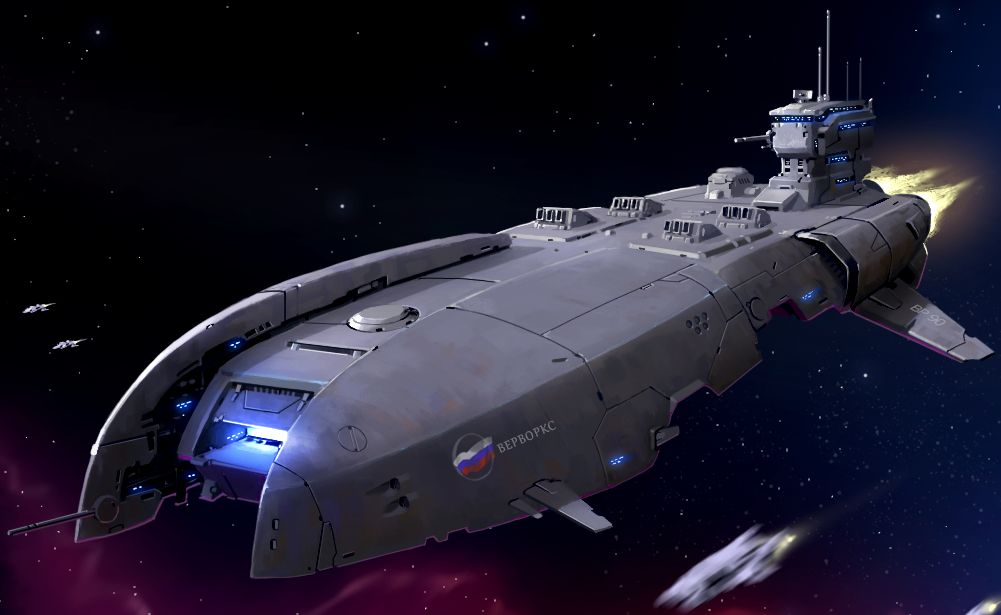 The Soyuz is a sleek flat hulled design with a set of four engines to give it decent speed. The fore section of the vessel is a hangar bay suitable to carrying up to 4 shuttles or even corvettes. This was meant specifically to match the UEB Gunslinger Class Frigate. However, the design had an issue with it’s upper ‘turrets’ the mounts were intended to be a new design for a modular pod turret, the modular pod parts worked as designed, but the turret aspects did not and failed. So the team creating the vessels bonded the pod frames straight to the hull. However,the initial pods were the effectively the same as the turrets on the underside and were meant to be turret mounted.

However, it also has a large forward Hangar Bay large enough to carry 4 shuttles or corvettes. While it was intended to carry a pair of shuttles and a pair of corvettes a more typical loadout is 5 fighters like the FA-50 Sokol Modular Fighter and a shuttle.

The Soyuz Class Frigate had been planned as the pinnacle of second generation Russian Federation frigates. However, an error in production has left a lasting negative on the vessels. With the dual use offensive/defensive mounts on the upper hull being locked into a forward firing position all of it’s point defense is on the underside of the hull. The Soyuz became something of a joke.

Relegated into secondary roles it proved an interesting ‘pocket carrier’ able to drop a small flight of fighters wherever needed. It should just avoid direct conflicts whenever possible.

With production cut after the initial run, it’s unlikely a variant will ever be made for political reasons. That said the designers did come up with several fixes to the ‘turrets’ on the upper hull which would convert the ‘Pod Mounts’ into ‘Pod Turret Mounts’ like they were meant to be. There are also a host of pod turret designs besides the lasers. Most notably an array of missile turrets and railgun designs. None of which were ever built.