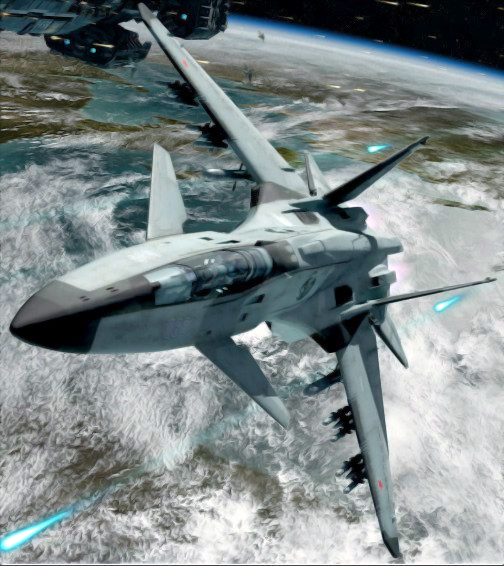 The Su-97 Kogot Aerospace Fighter was designed very early on, but has managed to prove itself. It is a ‘aerospace fighter’, but it requires a rocket booster to actually reach orbit from the ground and so has a extra heavy duty clamping system on the underside of it’s hull just for this. It then has a pair of old school scramjet style engines which let it operate in and out of an atmosphere.These are backed up by a series of thrusters for use in space.

One key aspect of what has kept it in service is an early version of Advanced Stealth Hull material. Combined with it’s particular style of engine which sends almost all it’s produced hear directly astern it was very hard to detect until it was very close.

The Kogot has a centerline Cannon Mount that uses the old GSh-30R Railgun. This was a 30mm direct replacement for classic autocannons and is now seen as undersized and underpowered. It’s main weapons are it’s 6 Medium Missile Pylons which typically hold a pair of Kinzhal AFMs and 4 Dual Shershen SRAMs. The paired Shershens on each pylon gives it a total of 8 to use.

The Su-97 Kogot, or ‘Talon’, was designed as the Russian Federations first homegrown aerospace fighter design. It was in use and seeing active combat when the GLS Gates became the new means of travel. It’s now still in use, though is slowly seeing other designs pass it up.

One true variant was a test platform that replaced the cannon with a early version of what would become the Gauntlet Laser Fixed Mount. This had near constant power issues since the powerplant of the Su-97 was never meant to handle an energy weapon. It did prove it was possible to use a laser in ‘dogfight’ engagements. This never saw a production run.